What Types Of Valves Does TPC Provide? 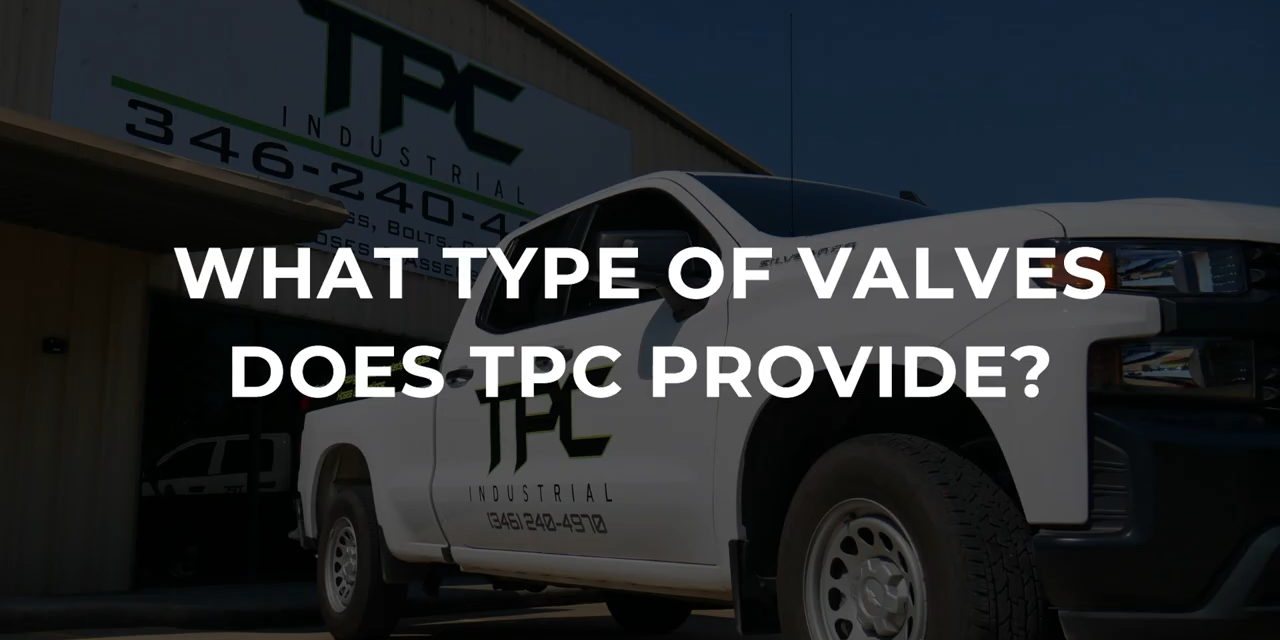 When you think of forms of transportation what comes to mind? Planes, trains, and automobiles maybe? Most people would not think to include—pipelines. Yes, pipelines. You see, all around the world pipelines transport huge amounts of fluids and gas. Everything from oil and chemicals to water and natural gas.

However, to work as efficiently as possible the flow of fluid needs to be regulated. There also needs to be a way to shut off the flow entirely. That is where valves come into play. Think of them as switches for turning pipes off or on or to limit how much fluid can pass through. Of course, there’s a more technical definition, but we’ll get to that.

Ok, so let’s get technical. A valve is a mechanical piece of equipment that blocks or regulates the amount of media that can flow through it. You encounter valves every day—turning on the faucet or using a gas stove for example. Valves control both fluid and gas and can be found in any machine that uses either. Even your body has valves—your heart has some important ones that are quite impressive.

Valves are normally constructed from plastic or metal and contain several different parts depending on their design. The outer section is referred to as the seat and is usually made of a solid metal casing with a rubber, or plastic seal inside. The body or the inner section of the valve fits inside the seat when the valve is in a closed position. There is also a mechanism for opening and closing the valve that varies based on the application of the valve.

Valves must close properly for their intended usage to prevent explosions, pollution, or loss of fluid and gas. The seal on a valve is a crucial component and must be in good shape to create a good seal when turned off. Turning a valve that has a high flow passing through it isn’t easy and requires some solid force. Some valves use levers to help with this, others are too large for manual operation and use hydraulic rams.

Where Are Valves Used?

As mentioned, valves are quite common, and you may have used a valve without even knowing you did. The valve industry is broad, with use in just about every industry to some extent. Applications range from irrigation systems on commercial farms to oil and gas movement at refineries. Even though the valves used may be different in both use and as well as the materials—they’re still valves. Take a more in-depth look at some of the industries that use valves of some type.

In water distribution, the pressure is often low, and the temperature is normally ambient. Those two factors allow for many valve design features that wouldn’t be suitable for more demanding applications. Water distribution system valves typically encounter pressures well below 200 psi. This translates into a simpler design vs. thick-walled, heavy-duty valves used in oil rigs that encounter over 50 times the pressure.

On the other end of the spectrum is wastewater treatment, where all waste from water lines ends up for processing. These pipelines take all waste fluids including solid mass and transports them to the sewage treatment plant. The pressure levels are similar or lower than that of water distribution systems and in some cases, valve requirements are lower. Gate and check valves constructed of iron, are the most common types of valves deployed here.

The oil and gas industry is probably one of the heaviest users of valve systems, including many hydraulic ram-based valves. If you think of oil, you likely think of oil gushing hundreds of feet in the air from oil wells. While technology has advanced, making gushers a thing of the past, it illustrates the extreme amount of pressure involved. As mentioned already, in the oil & gas industry pressures can easily exceed 10,000 psi. The most commonly used valves here are gate valves and choke valves at the wells, while offshore rigs use ball, gate, and check valves.

Types Of Valves We Carry

The reality is valves can be found everywhere from your local coffee shop to your municipal water plant. However, not all valves work the same despite having the same basic principles—they do the same job just in different manners. At TPC we carry a wide variety of valves mainly for the industrial sector including ones that meet strict industry specifications.

Gates are designed to operate fully open or fully closed, there is no middle ground. They are used as isolators rather than for flow regulation. It is important to note that gate valves should never be used for flow control or regulation. Gates can be used for a wide variety of fluids including potable water, wastewater, and gasoline. Depending on the usage, gates will also come in several design variations specific to their application.

The most common usage is in situations where pressure loss must be kept to a minimum and a free bore is required. When completely open, fluid flows freely with no obstruction, so there is minimal pressure loss. This type of design also makes it easy to use a pipe scraper when maintenance is needed.

These valves are used as a means of preventing backflow. Basically, they are a one-way only valve where the flow is unchecked in one direction. However, if the flow turns back, the valve shuts to protect the pipeline, as well as pumps and other valves. If there were no check valve installed and flow reversed course, water hammer would occur. Water hammer can severely damage an entire system, acting somewhat like a domino effect.

You will find checks often used on the outlet of a pump to prevent backflow. Used especially with centrifugal pumps since they aren’t self-priming, check valves  ensure water is kept in the pipes. In the HVAC systems of commercial buildings, check valves are also used. Most commercial HVAC systems pump coolant up several stories to cool a building. Without a check valve in place, coolant could succumb to gravity and flow back down, causing system failure.

Additionally, there are other considerations to make in order to ensure your system is safe and error-free. Everything from the right quantity of valves, the right size, right types, and right settings. All of these things combined will work together when properly configured to ensure a system is in perfect working order.

A globe valve looks very similar to a check valve from the outside—and no, it’s not round like a globe. The term globe valve refers to the flow control mechanism that often is round in nature—either a ball, plug, or disc.  While check valves are only used to prevent backflow, and gates only to close or open flow; globes are multitaskers. They are used to both stop or allow flow, as well as regulate flow when needed.

All globe valves no matter their design are comprised of a stem that adjusts up and down to regulate flow within the valve. The control mechanism is usually a round ball, disc, or plug that screws into the valve body. Seats are positioned in plane-parallel or perp and are designed with a stem that moves up and down to regulate flow inside the valve, it also contains a disc (ball, composition, or plug), and seat which is generally screwed into the valve body. Seats are designed in plane-parallel or at an angle to the line of flow.

A ball valve is somewhat similar to a globe valve in design; however, they are more commonly used only as a shut off valve. While they can be used for flow regulation, their accuracy is limited, so this application is not common. When being used as a shutoff valve, a round ball with a bore cut out is used to open or close. By rotating the ball 90 degrees the flow is blocked or allowed to pass through. They are known for their longevity and reliable sealing throughout their entire lifespan even after extended idle periods.

Need Valves? We Carry Nothing But The Best

At TPC, we only carry valves of the highest quality and are ready to ship directly to your project site. Representing the top brands in the industry, we have a vast selection to choose from. Contact us today to fulfill your project needs.